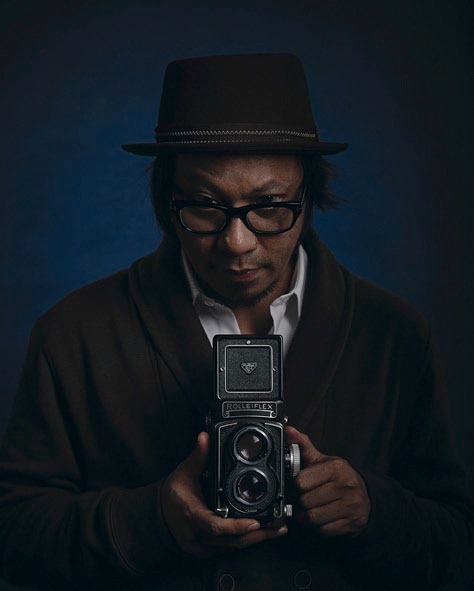 o  His real name is Lourd Ernest Hanapol De Veyra.
o  He was born on February 11, 1975.
o  His father was a retired policeman who is part of the first batch of rookie cops that is part of the Western Police District, with Alfredo Lim as their Ground Commander.
o  While, his mother is a pianist by profession and dietician by training, was actually stricter than his father.
o  Mike Hanopol of the Juan de la Cruz band is his uncle.

Musical Career:
§  Al Dimalanta the band’s leader and founder, making Dead Ends a four – piece band.
Ø He became one of band’s guitarists in 1994
Ø Dead Ends disbanded in 1996 (because of Jay Dimalanta’s passing)
§  After Dead Ends disbanded, Radioactive Sago Project formed accidentally.
Ø Lourd was promoting his first book, and instead of the usual reading, he got a bassist, trumpet player, and drummer to accompany him as back up for a spoken word performance. (“From three nagging nine na kami.”)
Ø He became famous for being the vocalist of Manila – based jazz rock band.

Education:
ü He studies grade school at Quirino Elementary School.
ü Colegio de San Juan de Letranfor high school.
o  4 years being part of the table tennis varsity team, where they were consistency NCCA champions.
ü Graduated at University of Santo Tomas with Bachelor of Arts in Jurnalism.
§  At age 17 he first tried drugs, it is because of his friends and abysmal curiosity.
§  He started his Master’s in Creative Writing twice (once in UP, the other time in UST) but only finished two semesters.
§  His interest in writing started only on his second year in college.
§  His biggest influences are Dr. Ophelia Alcantara Dimalanta, Teddy Boy Locsin, and Nick Joaquin.
§  His literary influences are Allen Ginsberg, and Jack Kerouac.
§  Gain his fellowship at UP National Writers Workshop.
§  He idolized the novelist Kurt Vonnegut.
§  He applied as OJT for Today.
§  He left Today in 2001 when he won a writing grant from the NCCA worth Php 250,000.
§  His very first article was a piece for the lifestyle section on Bea Lucero and the World Youth Day in 1995.
§  He was a newspaper scholar in his last two years in college at UST, supposedly to work with the paper after graduation.
§  It took 1 hour for him to write his speech for the UP Commencement exercises, where he coined the term “GMG” (Google mo, G***) for this generation.
§  He point out inefficiency is one of the biggest problems of a lot of young people today.

After College:
v Lourd de Veyra does a great job of expressing himself and by extension; his opinions, curses and all are shared by a lot of people who follow him on TV, online and printmedia.
v He was one of the hosts of Sapul sa Singko and in Aksyon on TV5, in Tayuan Mo at HYPERLINK "https://en.wikipedia.org/w/index.php?title=Tayuan_Mo_at_Panindigan&action=edit&redlink=1"Panindigan and Wasak on AksyonTV. He was the main host of the action documentary show Lupet  until its relaunch in early 2011.
v In 2013, de Veyra hosted another show for TV5  called History with Lourd.
v 7 years of being copy editor for Metro Society Magazine.
v He is not afraid to express his opinion about almost all imaginable issues this side of the planet.
v Lourd is also known for his criticism and comments against some of the country’s most prominent figures.
v De Veyra is simply a man who thinks critically and knows the value of wit.
v His bestselling novel Super Panalo Sounds! was10 years in the making.
v It was product of what he calls “bizarre” ritual where he spends New Year’s Eve writing.
v It is about “How high and how low you can go when you’re rocking and rolling?” was published.
v He has thrice been a recipient of a Don Carlos Palanca Memorial Award for Literature - A Third prize in essay (English division) in 1999, a second prize in the same category in 2003; and a first prize in teleplay (Filipino division) in 2004.
v It was around 2006 when he started to buy and care for ferns, flowers, and fruit bearings plants. He says that one plant is not expensive, but when you collect them, it becomes expensive.
v His garden was beautifully flourishing when unexpectedly, Typhoon Ondoy hit in 2009. (“Yung pinalaki ko at inalagaan kong Traveller’s Palm, kinailangan kong apakan at gawing Bridge to get from one end of the yard to the garage.”)
v He currently has six dogs: Buddy (the azkals), Petra, Lylodie, Tekla, Brownie (the Lhasa Apsos) and Billy Boy (the blind Shi Tzu).
Works:
Poems:
« Subterranean Thought Parade
« Shadowboxing in Headphones
« Insectissimo
Collection Of Essays:
« The Best of This is A Crazy Planets
« This is A Crazy Planets
ü A Letter to my Unborn Grandchild
ü Troll man ay Tao rin
ü Sa Pekikulang Pinoy
ü Life Before, During, and Beyond the 15 years of FHM
ü Bakit nga ba laging nakaupo si Mabini?
ü A Big Sleep
ü Sermon sa mga Fashyown
ü Four Hundred and Twenty Five Flying Elephants: Gabriel Garcia Marquez, RIP
ü TOP 10 IT Boys
ü Umasal lamang ng ayon sa ganda
ü Ang Tunay na LALAKE, Walang ABS
ü Sa ikaaayos ng Mundo, Wag Mag-sando!
Compilation of his speeches:
« Lourd de Veyra's Little Book of Speeches
« Espiritu
Story:


« Culture of Excellence, Culture of Conscience
Posted by Unknown at 3:44 AM 1 comment: